There is a great deal of misinformation about the Vietnam war and its aftermath. Many anti war people simply made up stories that became oft quoted and then became facts and remain believed today. Example - it was widely claimed that African Americans died in much higher numbers than whites in Vietnam. In reality blacks suffered 12.5% of the deaths in Vietnam at a time when the percentage of blacks of military age was 13.5% of the total population.

I rely heavily on the work of Professor Rummel (Oct 21, 1932 – Mar 2, 2014) of the University of Hawaii who has published extensively on genocide. He uses the term democide which he defines as "the murder of any person or people by their government, including genocide, politicide and mass murder."

Death by Government by Professor R. J. Rummel of the University of Hawaii. https://www.hawaii.edu/powerkills/

Conquest, Robert. The Harvest of Sorrow: Soviet Collectivization and the Terror-Famine. University of Alberta Press, 1986.

The Harvest of Sorrow: Soviet Collectivization and the Terror-Famine by Robert Conquest’s

Professor Rudy Rummel of the University of Hawaii has published extensive referenced and documented estimates on murder by government, which he terms democide. The tables below summarizes some of his work. It should be noted that various scholars have different opinions about deaths, especially in those totalitarian Communist Countries where little information is made available.  We know the most about Democide committed by the Nazi's and Japanese after we conquered them in World War II. We also have more information about Cambodia, who exposed the horrific murders committed by the Communist Khmer Rouge after they were deposed.  The USSR also made some information available when they exposed the murders committed by Stalin. We know less about the democide committed by Vietnam, Laos, and China, since the same evil communist government is in place. 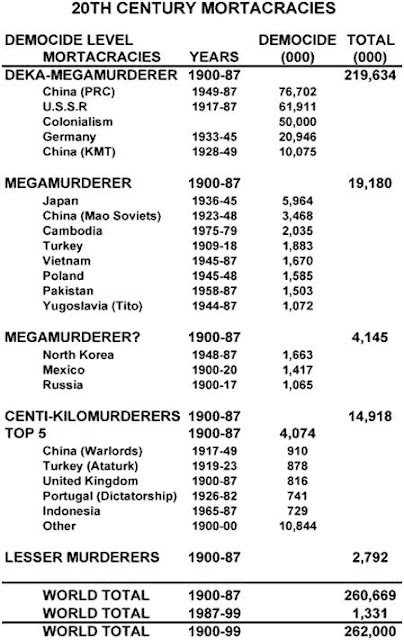